One Touch Passing on the Soccer Field 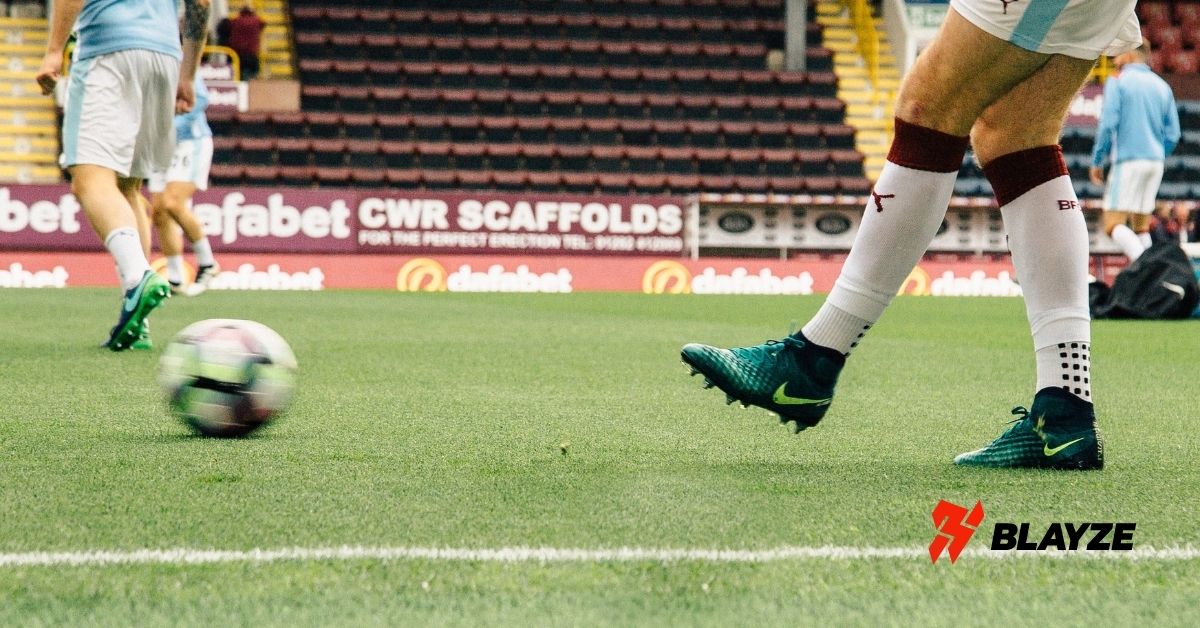 One touch passing in soccer allows you and your team to play faster. Your team need not play one touch soccer the entire game, but it can improve your chances of creating goal-scoring opportunities when used to unbalance your opponent.

Today’s session with Blayze professional soccer Coach Mike Semenza walks us through one touch passing. He discusses how it changed the modern game of soccer, how it can be beneficial to use, and different ways we can incorporate it at home to get ourselves better and more comfortable on the ball in one touch scenarios within the game.

What Is One Touch Passing?

One touch passing in soccer is when we take just one touch. When the ball comes to us, we only use one touch to distribute it back to another teammate or make a cross, or a pass, or a shot on goal.

In our previous passing sessions, we talked about the number one goal is to unbalance the opponent so that we can move play further up the field. The same principle applies to one touch passing.

FC Barcelona is a team that revolutionized one touch passing. Most people know tika taka football. That is how one touch in soccer gained worldwide attention. It changed the game because it requires the speed of play from every player on the field, offensively and defensively, to increase. That brings the intensity of the game up. It brings the pressure on the players up.

One touch soccer is a great tactic, but it is risky. Also, it is difficult to pull off throughout an entire game.

Let’s play the clip, watch it a few times, then we will come back and break it down. You see a string of 4 to 5 one touch passes that leads to a great chance on goal for Messi. Those four or five passes increase the speed of play so much that it unbalanced the opponent within their defensive third. It gave Barcelona a good chance on goal with their best player.

In our other passing sessions, we’ve talked about the line that breaks the field. When we get into our offensive third, the speed of play goes up. It is required to go up. The defense is in a frantic situation. They will be stepping to the ball because they want to win the ball back.

Increasing the Speed of Play

The reason we can use one touch passing and the reason it is so effective is that it increases the speed of play. It moves the ball to different people in different areas on the field. This requires the defensive team to chase the ball, to continuously defend, to keep tracking defenders all over the field.

We know as defenders that it is not fun to do those things. It gets us tired and at that moment where our team wins the ball back, we then need to be good on the ball again. But if we are defending the whole game and we are tired, it’s difficult to be quality on the ball when it comes your way.

Offensively, using one touch can unbalance your opponent a lot faster and also require them to get out of their positions to where we now have time and space on the ball. And we can exploit that space.

Let’s watch the video clip again with all these concepts in mind. With the first one touch we see him break the line. The defensive team is now retreating towards their goal, and they are out of position. As they are retreating, they are trying to get back into position.

Watch our session on Passing to Break Lines HERE!

The one touch passing interferes with the defenders’ movements. It unbalances them, Barcelona splits another line, and they are almost playing with the defender now. Making him run back and forth, chasing the ball, trying to decide who and where to cover.

The defender is unbalanced, creating time and space for multiple Barcelona runners to be able to get in behind the defense. They expose a gap, but Messi is unlucky with his shot.

When you watch the clip from another angle, you can see how the defenders have to spread out while trying to compact to protect the goal. But the one touch passing keeps them spread out and creates a lane for Barcelona.

How to Improve Your One Touch Passing

You need to try to incorporate this one touch tactic with your team and practice it with yourself at home. In your team training, you guys will go through patterns of play where you are focused on just being able to execute one touch passes.

Remember, this isn’t to make your life difficult, it is to make the life of the other team difficult. If we can increase our speed of play on offense, that means defensively they have to do even more work to match our intensity on offense.

Once the other team wins the ball back, they will be tired, and we have a good chance of getting the ball back right away. With our one touch passing, we can move the ball around to different parts of the field quickly to unbalance the opponent and make them stretch or to make them compact. To create time and space.

Get outside, or inside if your parents allow it. Find a wall and work on your one touch passing with your instep. Work on adjusting your feet off the wall to be able to play it one touch again. Aim for 100 one touch passes on one foot then switch feet and go for 100 more.

Work With Your Team

In a team setting it takes more than wall ball practice. It takes communication, movement, solid technical ability to be able to lock your ankle to complete one touch passes all over the field.

You’ll work individually and you’ll work as a team to be able to increase the speed of the game, to match the FC Barcelona style of play. A quick speed of play that demands so much from the defense.