Overtaking On The Racetrack - What Went Right & What Went Wrong? 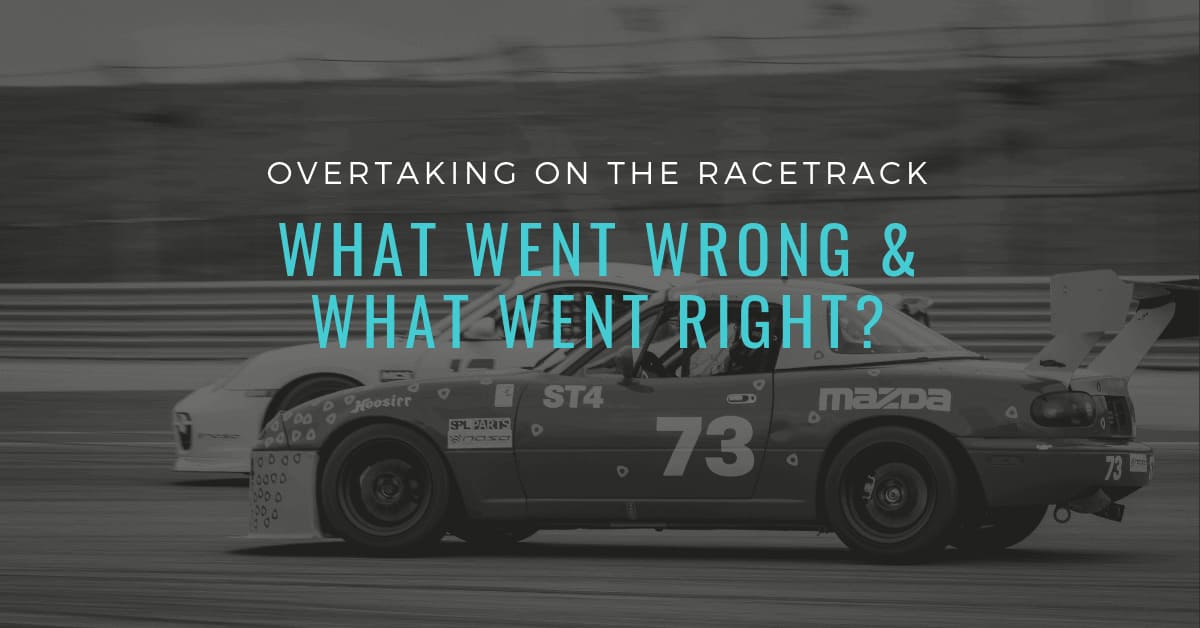 Hey everyone, welcome to this Blayze video, where we’re breaking down overtaking. This is going to be the second video in our overtaking series, where we’re going walk you through steps on how and why sometimes overtaking is successful, and why it’s not.

Last weekend in the Formula 1, Azerbaijan Grand Prix we saw the Red Bull teammates collide together with Ricardo, try the over-under technique. In today’s DTM Race, we saw René Rast try a very similar move, and it came out successful. Here we’re going to break down what the differences were, and why one was successful. Why one took two cars out of the race.

What you’re looking at is René Rast on the left, Daniel Ricciardo here on the right. For coaching purposes, we’re going to go frame by frame and break down what worked different for each of the overtaking scenarios, and what ended up leading to one be a successful pass, and one ended up in a crash. If you guys want to see the full version of each video, we’re going to have that in the description below, so make sure you check that out. But for here, let’s start breaking this down.

We’re looking at this here. Early in the kind of straightaways, we’re looking. Both guys are just kind of drafting the cars in front of them, there’s not many differences really right now. We can see René’s a little more to the left, starting to learn more to the outside, where Daniel’s just following them straight, but that’s not a critical piece of information really. We’re going to go further ahead, and this is where it starts to get interesting.

We can see here, on the left, René Rast is looking like he’s really going to commit to the outside. Daniel, at the same kind of point, is still right behind Max, not giving any indication of where he’s going. So Max is more uncertain, so he’s definitely going to hug to the inside line, and force Daniel to go to the outside. With René, he’s kind of already saying, “Hey, I’m going to the outside here,” so he’s making his intentions at this point clear.

Go further forward, and this is where we’re going to see it. This point right, now we see Daniel start to open up to that outside. As he’s done earlier in the race, that hasn’t been successful, but that’s what Max is expecting. That would be the normal maneuver. We’re looking here at René, his hands are straight. He’s already kind of going for that outside line.

As we go forward a little more, now we’re going to see both of them start to commit on the over-under maneuver, as coming back to the inside. Now we can see, let’s just go a little further forward. Now we see Daniel’s hands have started to turn back down to the inside. There’s no room for him right now, but that’s going to change as Max starts to open back out. So Max is thinking he’s going to the commit to the outside, I want to open my radius to the corner. I’m going to come back, open a little, but still leave him a car width of room on the outside.

Now we’re going to go a little further forward, now we see René Rast’s hands start to turn on the inside. Doesn’t look like there’s really any room there, with the car all the way to the inside. But it’s going to be really impressive with his decisiveness. That’s one thing I want you to remember, how decisive René was in this maneuver.

Let’s go a little further forward, and this is where the separation between the two overtaking maneuvers starts to happen. Right here, we’re going to notice Daniel started to go to the left, but now his hands are pointing back to the right. He’s not being decisive. Max has opened up the room there, he’s got a car width on the inside, but he’s not just committing forward, and making his intentions clear. He’s kind of got a fake to the outside, come back to the inside, fake it to the outside. Max really has no clue what he’s doing.

When you’re in the car in front, and you don’t know where the car behind you really wants to go? Sometimes that can lead to kind of being lost and not know where to go. I’m sure at this point Max is a little confused.

Now we want to see the decisiveness. Daniel doesn’t show it. We’re going to see that as we go a little further forward, how decisive René was, and why that lead to a really good thing for him.

We can see here. Now, this doesn’t look like there’s much room here for René to actually commit to, but the car in front of him does really good thing. He doesn’t move in the brake zone, he leaves a car width of room to the inside, which is so critical. Right now, Max has given Daniel a car width of room? But what Max is going to do is he’s going to move in the brake zone. That is a big no-no.

We never want to see movement more than once in the brake zone. We always want to see give your opponent some space. Give them one car width to the inside, and give them room to the outside. You don’t want to just completely block them, once they’ve committed to a line, because that’s what’s going to cause accidents. Especially in high downforce cars, where the car behind doesn’t have as much grip as the car in front.

We can see with Daniel’s hands he’s trying to back to the outside, but as he comes behind Max here, he’s going to lose the front downforce, he doesn’t have the same amount of grip. He’s going to try to get out of the way while braking, but as he loses the downforce, his front tire is going to start to lock and he’s got nowhere to go. He’s going to slam into the back of Max.

That was our analysis on why the Red Bull teammates ended up in a crash, and why the same move in the DTM from René Rast ended up cleanly. The biggest differences are being decisive, and the car in front, not moving in the brake zone and giving at least one car width of room to the car overtaking. Those are the two most important factors to getting a clean overtaking pass, whether you’re in club racing or a professional driver.

Thanks for watching Blayze, and our overtaking analysis series. Hopefully next time you’re on track, you’re going to be decisive in your overtaking maneuvers, and you’re not going to move in the brake zone. That’s going to lead you to having a clean race, making it to the finish, and hopefully winning.