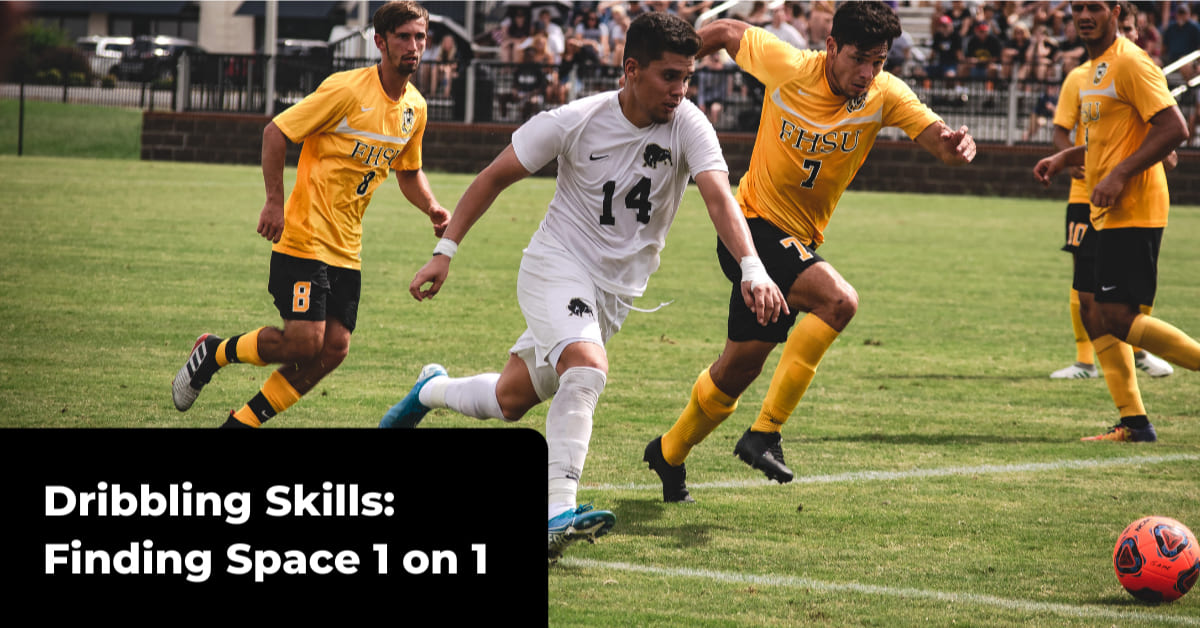 In order for a player to be successful in tight areas and spaces, a player needs to have the ability to dribble the ball. Players need to be able to beat an opponent, recognize space on the field, know where their teammates and the opponents are located, all while being pressed.

Pep Guardiola said of Andres Iniesta in The Artist: Being Iniesta “It’s very hard to teach a bad player to be a good one. You can’t really teach someone to dribble. The timing needed to go past someone, that instant in which you catch out your opponent, when you go past him and a new scenario opens up before you…Dribbling is, at heart, a trick, a con. It’s not speed. It’s not physique. It’s an art.”

Blayze Coach Mike Semenza states that when you are in a tight space and passing is limited, look to your 1v1 dribbling skills to move the ball. The best dribblers make it seem like the ball is glued to their feet. Watch some of the pros, Messi, Ronaldo, or Neymar, and you will be amazed at what they can do when dribbling.

When to Use 1v1 Dribbling in Soccer

During the chaos of a soccer game, there are moments you find yourself trapped in a no-pass situation. Using 1v1 dribbling, you get a chance to show your flair and creativity with the ball and it is a great chance to get noticed. However, dribbling is not just about tricks with the ball, it is a crucial tool to maintain in order to get out of those tight spaces.

There are three essential elements you should make first to decide if you will dribble or take on a player.

Let’s break this down step by step.

Notice in the video by Coach Mike, that the AC Milan player receives the ball in a wide area where he knows he has a little bit of space to take on players. He finds himself isolated in a 1v1 situation, he is manned up with the opponent and forcing the defender to react to his decision-making process.

Next, the player sees a massive amount of space in front of him that he can take advantage of. He is using his vision to locate that space and he starts to formulate a plan of his next actions. He knows he can move the ball forward if he can get into that open space.

Third, he must use a form of deception to get past the defender. He cuts to the side and exhilarates forward. Pushes between two defenders and lands in a really tight spot with three men on him. Now he must fool the players. He deceives the defenders again with a chop. (You can use several various moves here.) The ball goes past the defenders and now he lands back into open space with a new defender.

From here, this player must go back to deception or decide on his next move. He can pass the ball off, or because he is a high-level player, he exploits the open space more by shooting on goal toward the back post and scores.

How to Use 1v1 Dribbling

When your passing options are limited, 1v1 dribbling and using your speed is a great method to beat the defender. You have the ball, so you already have an advantage over your opponent. You want to make the defender have to guess what move you will make and react to whatever you decide to do. You can do this by attacking them directly with the clear intent and purpose of dribbling. If you show hesitation or indecisiveness, you risk losing the ball because you lose your momentum.

Remember to dribble the ball while keeping your head up and looking around at your surroundings. You want to be aware of where your teammates are and where there is open space. The best 1v1 dribblers can use both feet when dribbling, so do not forget to try both left and right foot dribbling when practicing.

Soccer requires a lot of fast and chaotic decision-making. The more we learn about the decisions we can make, through coaching feedback, the easier it becomes for our brains to remember what to do in a chaotic match.

It takes years of hard work and dedication to rise to the top. A study once stated that to become an expert at anything, you must work on the goal for more than 10,000 hours! That is a lot of practice. Of course, research now indicates that this is not entirely accurate, it gives you an idea of how much practice is needed to master a concept. So do not become discouraged if you struggle to grasp some of these dribbling concepts right away. Just keep practicing!

When watching professional soccer players, the best 1v1 players, it is not their ability to use nutmegs, elasticos, or stepovers that make them great. It is their ability to change direction and speed. To turn quickly and decisively. To see their surroundings and to know when to stop at the right moment.

Diego Maradona is perhaps the best dribbler ever in soccer. He could get past defenders, with ease, by using body feints to fool the opponents into believing he was going the opposite direction. Maradona could change directions almost instantly. In the 1986 World Cup game against England, Maradona said “in that game no one could have stopped me, not even Mike Tyson.”

The secret to mastering any skill is practice! Are your 1v1 dribbling skills a bit rusty? Could you use direct feedback from a professional coach on how to increase your dribbling skills and dominate on the field?