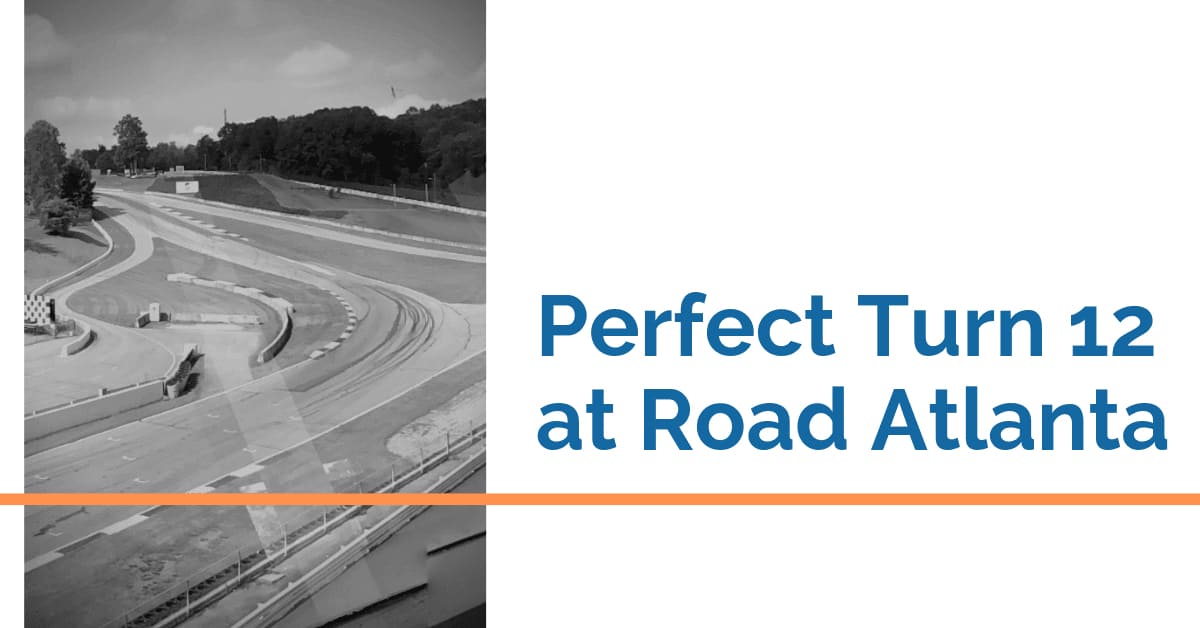 The big points we would want Michael to focus on in his driving through turn 12 at Road Atlanta:

Hey, everyone. Welcome to this week’s Blayze Coaching Tips in Under 60 Seconds. Here we ask drivers, “What corner do you struggle with the most?” We ask you to send us your video of you driving on that corner, and in 60 seconds or less, I’ll go through that video and give tangible ways on how you can improve.

So this week, we’re working with Michael. Michael is struggling with Turn 12 at Road Atlanta the most. One of the most intimidating corners in the world. It is downhill, it compresses, it’s almost flat. In some cars, it is flat all the way through it.

So let’s go ahead here. We’re going to turn his volume up. We’re going to watch it full speed, and we’ll come back and I’m going to go through the video and give tangible ways he can improve, in 60 seconds or less. Let’s go take a look at how Michael’s doing.

Great. Okay, here, so we’re going to go back to this up a little bit. I’m going to put 60 seconds on the clock. Turn the volume off, and we’ll go through the video. So let’s get started right now.

The first thing I’m looking at here, is the turn-in point. You can see right here we’re starting to turn in about a car-length before the end of the curb here on our left. I’d really like to see Michael turn in at the end of the curb here. That’s going to allow him to apex later. The big issues I’m looking for is we’re apexing too early, and that’s causing a lot of issues on the exit.

Middle of the corner, if we go a little bit farther forward here, I’d like to see the throttle manipulation, speed manipulation, come a little bit earlier, so we’re not breaking in the middle of the corner. The next thing here is, we’re apexing too early. See, we’re apexing here? I’d like to see that apex come here, and that later, slower turn-in will allow that to happen.

The next thing is, our throttle application’s really coming too early. So you can see we’re starting to feed it in here. We have a lot of turn left. The big issue is we get back to full throttle, then have to release it, release it heavily. That costs a lot of time. We want to avoid that. And it’s caused by too early throttle application, and too early of an apex. So Michael’s throttle looks something like this.

Oops, and that’s the end of the timer, and we really want to avoid any of that. So, to review, later turn-in point, big thing is a later apex, later initial throttle application, so we have a nice, smooth progression to full throttle, and not having to release it on the exit.

If you’re looking to take your driving to the next level in 2019, please visit https://blayze.io, where we have an online marketplace where you can work with the very best pro coaches in the business in an affordable and easy-to-access way. You simply send in your video from any device, filmed on a iPhone, filmed from your GoPro, or a SMARTIE camera, any more expensive camera system, and our pro coaches will review it just like we did here. An entire lap, and we’ll give you personalized coaching tips on how to improve.

We also have a great data analysis session. We can go through your data and our very in-depth but very powerful race analysis session will watch your entire race and give you feedback, not only on how to go faster, but also on racecraft. Getting better race starts, overtaking, defending positions, really taking your foundation as a driver and molding you into a race-winning driver.

You can go work with drivers like Memo Gidley, myself, Josh Hurley, so many great, fantastic coaches out there, in the easiest way possible. So, we hope you’ll check out https://blayze.io, and we’ll see you at a track this year.