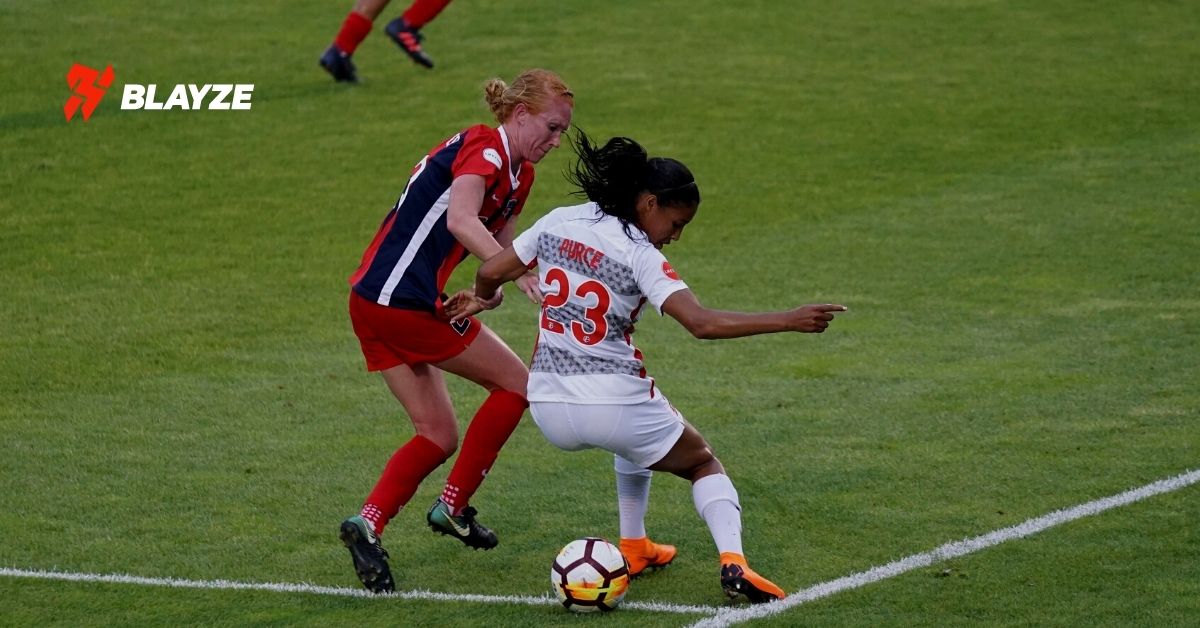 Soccer is a team sport. Eleven players on each team move and work together. However, there are moments of each game where individual performance can often play an important part in the outcome of the game. There are attacking and defensive movements that soccer players need to develop for moments in games where they find themselves in 1v1 situations.

Blayze professional soccer coach Mike Semenza is here to talk to everyone about 1v1 defending and ways to improve your skills in a 1v1 defending situation.

We will look at a short 20-second clip that features Kylian Mbappe, a forward for the France National team and Paris St. Germain. Arguably one of the best strikers in the world right now and one of the most dangerous players on the field. He is going up against Virgil van Dijk, a defender for the Dutch National Team and center back for Liverpool FC, and one of the best defenders in the world. This is a great 1v1 matchup to analyze and see what we can learn from it in terms of our 1v1 defending.

Video Analysis of the Pros

I am going to play the clip a few times, slow it down and break it up to go over these key elements of how to improve your skills of 1v1 defending. We need to analyze what van Dijk does to kill this attack from one of the fastest players on the pitch.

Right away we have Mbappe on a breakaway, pretty much a 1v1 breakaway. There are a couple of defenders tracking back as well. The main defender you can see is Virgil van Dijk. We are going to highlight only what van Dijk does in the next 10 seconds in a tense scenario. He has one of the world’s best players running at him at full speed.

As we watch it, I want you all to stay focused on van Dijk’s movements. He does a great job getting in front of the ball, stepping in, and winning the ball from Mbappe. This gives the Dutch team a chance to then push down the field in the other direction.

But what does he do so well?

This is a breakaway, or a counter attack, whatever you want to classify this as. It is a perfect 1v1 example. One attacker versus one defender. Virgil van Dijk does a couple of things here that enhance his ability to not get beat by Mbappe.

Let’s start with his movement first. He is kind of jogging or jockeying himself into position. The first and most important thing in terms of your 1v1 defending is your positioning.

Are you putting yourself into the correct position?

If you are out of position to begin with, it is going to be easy for that attacker to find ways to get around you. Van Dijk is kind of on a jog, dropping his hips low and putting himself into an important position.

Notice how he is slowly putting himself between the attacking player with the ball and the goal behind him. If he can cut off a direct lane to the goal, the attacker is forced to make moves to either the right or left side.

By forcing the attacking player to make moves to the side, the attacker gets further away from the goal. They are getting further away from a scoring opportunity all because the defender is putting himself between the ball and the goal. He cut off the entire lane and does not allow Mbappe to dribble forward past him, straight to the goal for a shot.

Again, the number one thing to do is get your body into positioning. Get your body between the two most dangerous things, the attacker with the ball and the goal. Force them to make a decision. If you force the attacker wide, you may allow your other defenders time to travel back and help defensively.

Next, watch as van Dijk slows up and moves his body even more. You see him get low. Both the attacker and the defender get low. This is important in terms of movement because they are getting in that most athletic position as soon as there is a moment of commitment from the attacker.

After getting yourself into the right position, the next key element or principle of 1v1 dribbling is patience. Wait for the attacker to make a move of some sort. It is a pretty simple element, but one that many defenders do incorrectly. Patience, watch the attacker, wait for them to make the move.

If they do not move, for example, Mbappe dribbles forward and not to the side, Virgil van Dijk can stick his leg out and knock the ball away. But you see van Djik get low, his head shrinks into the ground. You can see Mbappe’s head shrink into the ground because they know they are about to produce an explosive action.

Van Dijk positioned himself properly, he is being patient and waiting for Mbappe’s big move so that he can intervene, which is the next key element.

Picking the video back up, we see van Dijk get low, Mbappe makes his move to the right. He pushes him into a wide channel. He engages him and he intervenes.

As soon as van Dijk sees Mbappe make that move he goes shoulder to shoulder with him. Pushing him off balance, making him readjust the ball with his feet. It is essential to remember that at some point, we do have to engage and get an arm on the attacker, then we intervene.

Van Dijk does a good job of staying on his feet the whole time until that moment happens. You will hear coaches say, “Stay on your feet!” when you are defending. That is because if you try to intervene too early and you go to the ground, the attacker can burn right past you. Van Dijk intervenes at the right moment, gets his foot on the ball, and stops Mbappe’s run.

Review of the Key Elements of 1v1 Defending

1 – Positioning. Position yourself between the goal and the attacker. Cut off the lane and force the attacker to make a move.

2 – Patience. Go slow, let the attacker commit to one way or the other. Don’t go to the ground too soon.

3 – Intervene. Get your shoulder into the attacker, make the final action for them difficult. Intervene by getting your body in front of the ball at the right time.

Defenders, when you run side by side with another player, use your arms. Slow down the attacker. Push them off balance and make the attacker use their body to protect the ball. As soon as the attacker makes a move, use your body to block the ball.

Training is the best way to improve your skills. When you are in team training and you come into a 1v1 situation, you need to try and implement these key elements.

Work on positioning your body correctly, then work on cutting off the angles of the attacker.

Remember to be patient and not to dive in immediately.

Wait for the moment of commitment so you can intervene and take the ball.

When you use team practice to work on these skills, you will see your game 1v1 defending skills improve.