Develop Your Movement off the Ball into the Box 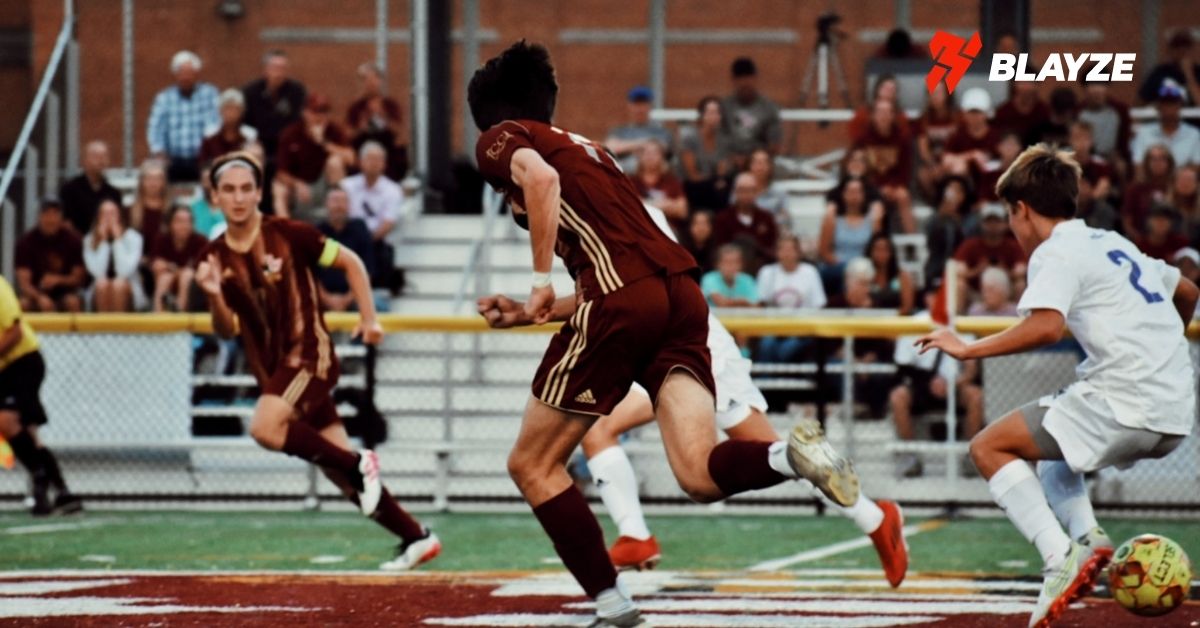 Today, Blayze professional soccer Coach Mike Semenza brings you another amazing lesson focusing on attacking principles. In this session, we will discuss movement off the ball for attacking players.

We will look at what aspects go into deciding how to make your movement off the ball. And discuss how attacking players can create dangerous opportunities for their teams.

Movement off the Ball

The term “movement off the ball” or “off the ball movement” is a tactical term to describe a situation when a player is making progress on the soccer field without the ball. The attacking player needs to make an active effort to look for and find open space between or behind the defender lines so they can receive a pass.

The player can start their movement without the ball but because of their movement, end with the possession of the ball. Movement off the ball links with counterattacks, penetrative passing, and quick transitions.

The benefit of a quality run off the ball is the attacking team moves into a dangerous area of the field and creates a goal-scoring opportunity.

Video Analysis of the Pros

We will focus on professional soccer player Mohamed Salah, a winger for Liverpool F.C. and the Egyptian National Team. Throughout his career, he’s probably made thousands of these runs. I picked one out from a huge compilation for us to analyze.

This clip is from a Liverpool game. We will do our normal watching of the clip, then break it down in slow motion. Also, we will talk about what went into Mohamed Salah’s decision-making process to create that movement off the ball.

The clip starts in Liverpool’s defensive third. I want you guys to notice how quickly Liverpool gets up the field. Watch how quick the decision-making has to be from these players. Phillipe Coutinho, the attacking midfielder, is pressing up the field with the ball. He’s running to the backline and slips the final ball into Salah behind the backline. We see Salah with and without the ball.

The player we are highlighting is Salah. Keep your eye on him the entire way down the field. Do not worry about the ball right now.

What is the first thing that we noticed?

First, this is a counter attack in a 3v3 situation. Second, the decision-making process for the attacking players is already starting to happen. They are looking for channels that they can run in behind. The man on the ball can either keep moving forward or pass it into the open space, behind the defender with a good run off the ball from another attacking player.

Back to Salah, he has a 60 – 80 – yard sprint to make up the field. His defender turns his head around, tracking him. Salah is one of the fastest players in the world, so this defender has got a lot of worry on his mind right now. “Don’t let him behind me!” is most likely what the defender is thinking.

Here is where it gets interesting. On top of noticing Salah’s movement in the final third, shift your attention to the middle defender, the big center back. His sole responsibility is getting himself in front of the ball as we talked about in our defending session on Virgil van Dijk.

Decision-Making and off the Ball Movement

As soon as the center back takes a step to pause and engage the attacker, Salah completely changes his course. His defender thinks Salah is going to continue in one direction, but he takes one step to move behind the backline. He sees and identifies his first run no longer has space because the defender did his job. But Salah can change his decision-making based on what other players are doing.

Entry Into the Box

Salah pushes into the open space and boom! He is in a dangerous position. This is called an entry into the box, as an attacking player. Whenever you can receive the ball either on the run or on the dribble, and get yourself inside the 18-yard box, that is creating a dangerous opportunity.

That is your job as an attacking player. Salah’s job, all game, is to cause havoc by creating opportunities, even if he does not score the goal.

You all are probably wondering why I did not pick a clip where someone makes a run behind the backline and scores. It’s not always the case. There is nothing wrong with creating opportunities. We’ve talked about this before you’re not always going to score. Other things coaches are looking for are how many dangerous opportunities can you create as an attacking player. Both with and without the ball.

As you can see, Salah tries to get the shot off, it is blocked, but Liverpool still has the ball in the attacking third. We still have numbers up and there are still defenders retreating back. This is one of those moments of chaos. This is when defenders are freaking out because numbers continue to pour into the box. This was all created from one little decision-making moment of Mohamed Salah.

How to Improve Your Movement off the Ball

If you are a winger and you are continuously making runs outside, down the lines – my coach used to call it “digging a trench” – you need to decide when to move inside. Don’t just stay outside and wait for the ball to go wide.

I could pick out millions of clips on this. I want you all to go and start watching games on the weekends and during your free time in the week. Pick these elements out for yourself. Keep your eye on the winger if you want to learn about movement in the final third.

Concentrate on where the next pass needs to go before you receive the ball from a teammate. Try staying between two defenders to help create confusion about who needs to guard you. Then create space from the teammate with the ball. Stay vigilant of the defenders and their movements.

Keep working on these skills in team practice and pretty soon you will be a natural in a game situation.

The more versatile you can be with your movement, the more dangerous your runs will be, the more of a nightmare you will cause for defenders.