How To Read Racecar Data 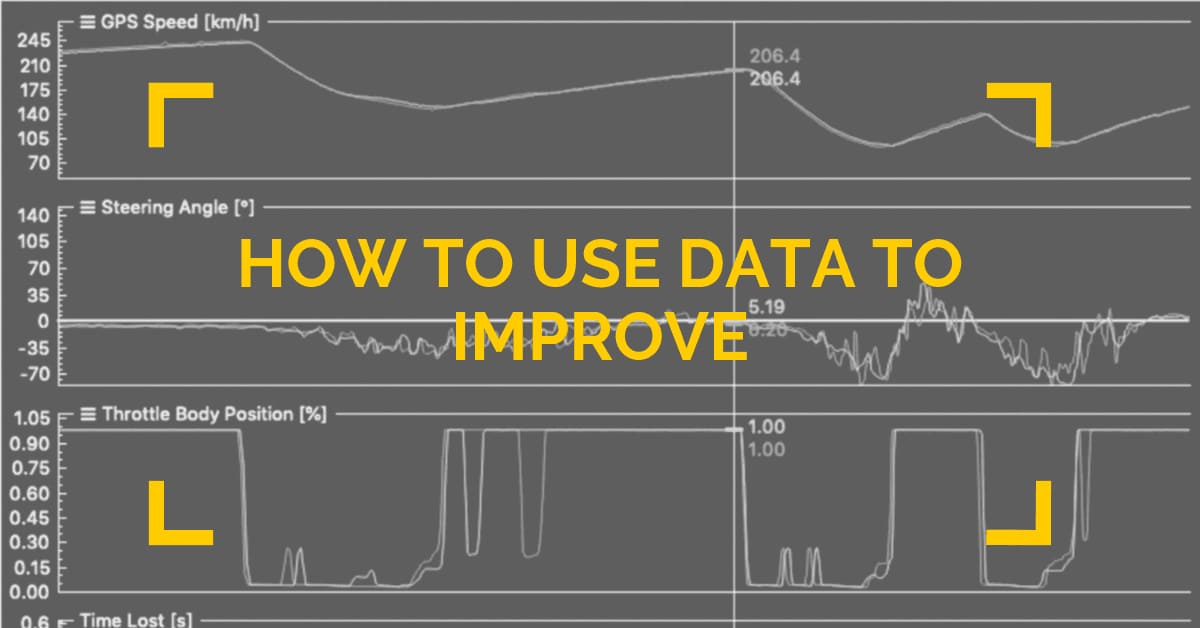 Hey everyone, welcome to the Blayze video breaking down what I look for in data. I love to use data, it’s a great visual tool I use a lot in my videos so to help understand some of the videos I wanted to break down exactly what to look for so you can see it immediately. So we have right in front of you is a one lap, no overlay over another lap. It’s on top, wheel speed. Below that it’s throttle position. Below that is brake pressure and then we have steering angle.

So for the throttle position, the brake pressure, the higher up means as closer to 100% the way down means there’s none. The first thing I look for is the shape and ramp of the brake pedal. You really want to see the triangle, huge ramp initial and then a gradual release. If you see in turns one, in turns three, those first two brake zones that’s exactly what we look for.

So now overlaying it over a secondary lap. Now at the top we have variants so you can see a black solid line. When the black lap is below that, it means the black lap is faster. When it’s above that, it means it’s slower. So as a driver, when you’re looking to compare yourself, you’ll look at that variance and you see quickly where am I losing, where am I gaining? So I could see in turn one immediately, I’m gaining pretty well all the way through one I’m losing there on entry to three but my biggest loss is on the exit of the chicane.

So everywhere else I’m pretty much the same. There’s no big differences. The big break cells, everything looks pretty similar between the two laps. So now I know immediately what do I need to look at. You can also then look at some steering traces and for instance there in turn three where there’s a little bit more steering, I know I have more understeer and if the steering wheel is more choppy like it is there for the red lap, in turn one. I know I have more oversteer so you can get a quick glance at the setup and what the car is doing to help confirm to yourself as a driver what’s you’re feeling in the car.

Breaking down a little bit deeper where I’m losing and gaining times. So we see in turn one, I’m gaining a little bit of time on the brake, coming off the brakes. But I’m just getting to that initial throttle earlier than the red lap. And that’s what’s helping me gain the speed. I’m not getting to flat earlier, it’s just that first crack of the throttle. But then what I gained, I lose a little bit by braking too hard initially into turn three. You can see that little bit … We break at the same point but I just break harder initially and that’s what causes the lack of speed into three.

And that’s where I know I’m losing time. Now to the chicane, I can again, see now on this lap, I’m bringing a little bit more speed in on the black lap, which is helping me get a little bit of time on entry there. But look, I’m so much later to that initial throttle now I’m losing a ton on the exit here. So now as a driver, I know, hey, sure, I can bring a little bit more speed in, but it’s not gaining me much. What’s really important here in the chicane is getting to that initial throttle and trying to get to full throttle earlier.

Now I know, okay, let me change my strategy a little bit and I could pick up that 10th or two that I’m really missing. You can also then again see that steering wheel trace on the red. See I’ve got more wheel in it and I’m holding it at the peak wheel pressure longer. That’s understeer you’re looking at there.

If it was more choppy from bottom to top, that would be oversteer. But there you can see I’ve got understeer on throttle. I’m just holding it there. So that’s really what the important parts we look on in data. Hopefully this was helpful. Do you have any questions? You can always reach out to us. We’re here at Racers 360, we want to help you get better. Hopefully this little diagram’s going to make all of our videos make more sense and get you better on track.