Improve Your Racing At Night 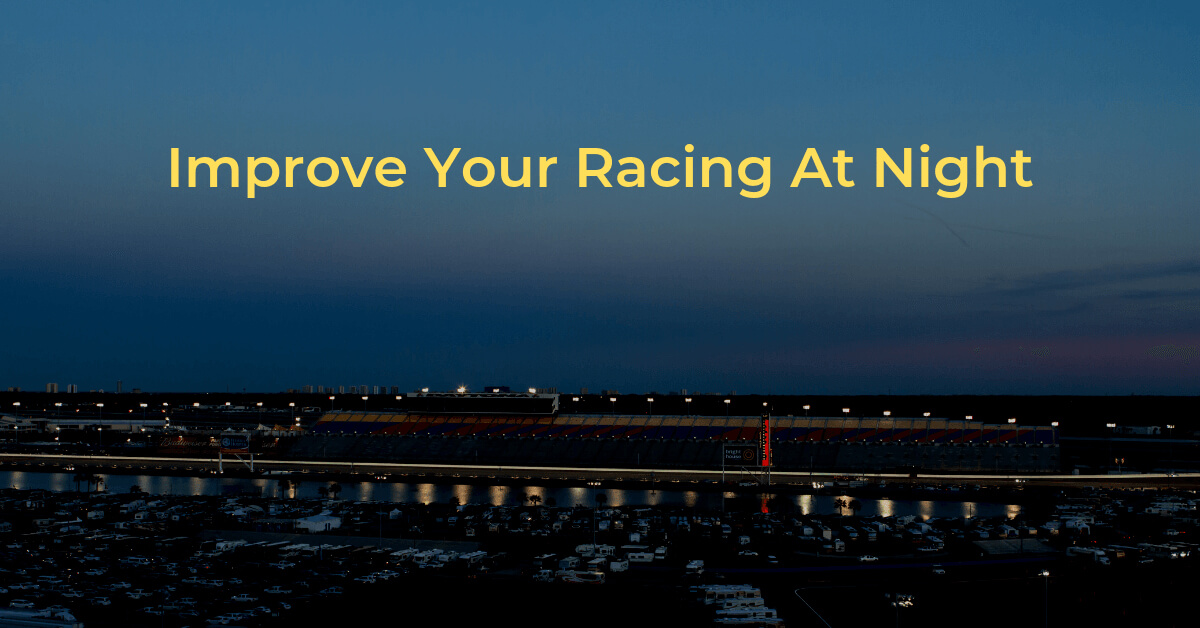 Hey everyone. Welcome to the Blayze channel. Today I'll be breaking down racing at night. It's the best feeling in a race car, but it can also be extremely challenging and frustrating. You feel like you've rolled more speed to every apex on the corner, you've gotten to throttle at the perfect place, you come across the line and you're seconds off the pace of where you are during the daytime. Why does that happen, and how can you fix it? We're gonna give you the skills to focus in on to cut that lap time at night and get you even faster than you are during the day.

Now if you’re looking for more motor sports coaching tips on all subjects, hit that subscribe button below. We would love to have you a part of our Blayze community, and if you have any comments or questions during this video, leave a comment below, and our Blayze team will get back to you. We’re always scrolling through the channel, we love hearing from you guys, so please leave a comment or hit that like button if you enjoy this video. Now without further ado, let’s start breaking down racing at night.

So you’re hopping over the wall, running to the car. You’re gonna buckle yourself in tight, it’s your first night stint. What are we thinking about right now to gain speed? Everything feels faster at night, so we need to really focus in on two foundations of car control, and feel, and vision. So because it’s harder to see at night, and everything feels faster, we really have to rely on the car feeling. Often times we’re using all of the road only because we know we’re supposed to and not because the car is taking us out there. So at night, to be fast, it’s critical to have a feeling of the car. You can’t rely purely on your vision, so because it’s difficult to see at night, and everything feels faster, that magnifies the need for the car feeling that we have as drivers.

Now, we have a great video on how to find the limit of the car. I’ll have that in the comments below if you want to take a look at that, and that video will really help you for the skills necessary to find time at night. Looking forward as far forward as possible is always important, but occasionally at night you can’t actually see the exit of the corner until you’re right on top of it. Turn 1 at Sebring is a great example of that. So how do the professional drivers find the time necessary when they can’t actually see the rest of the corner?

Using turn 1 at Sebring as our example on how the pros find the time around there when they can’t rely on their vision, they rely on what the car is telling them. Now, when you’re trying to roll the speed through the corner you have to go beyond the limit of what your brain thinks is possible initially and the way you can do that is by looking at where you end up on exit and feeling how hard you have to fight the car to stay there. You know that if you’re not fighting the car during the daytime to stay on line that your not at the limit of the car. So at night it’s the same principle, but checking in on yourself as a driver to make sure that you’re still fighting the car to keep it where you want it and not just driving it to where its supposed to be, but racing it to where its supposed to be becomes critical.

As a driver you want to check in on yourself and think consciously, “Am I really at the limit of the car or not?” every lap or every 2-3 corners as you are getting used to the speeds. Don’t focus on the feeling of the speed because as you start to do that everything your body and your eyes will start to adjust and things wills start to get a little bit slower, but it will never feel as slow as it does during the day.

Now for the most difficult part of racing at night, the actual racing when you have someone behind you and those bright lights are shining in your mirrors that makes it so difficult to see. So here are a couple tips that are going to help you in those situations.

If you have any type of light tinting that you can put over the side mirrors and the center mirror to help dim that light, it can become such a helpful tool for you. Also, if you have any other lights that are bright in your face, any shift lights or lights off your dash. If you could dim those that’ll really help you. It’ll put less stress on your eyes. It’ll allow you to look out that mirror, sorry, that center windshield and see further and that’ll really help massively. Now, you wanna make sure that the tint you can still see through so its pretty fine line there. Also, if you have some tape that you can put on your visor, if you drive with the visor open sometimes you’ll be able to move that to block off the center mirror for a quick second if the cars behind you and then move it back to where its not blocking your vision anymore. Obviously don’t blind yourself, but that is something that a lot of pros use that is very, very helpful.

Now, none of these things are going to completely solve the problem. There’s really nothing you can do. It’s one of the things that makes nighttime racing such a difficult task. So relying on communication with your team becomes so important, if you have a team. On the pro side of racing, we spend a lot of time leading up to the nighttime session with whoever is on the radio with us telling them what we need as drivers in terms of communication. Who’s the car behind us, how far, how many cars? Tell us as much information as you can during the night because that really helps the driver. The teams talk so much more during nighttime racing versus during daytime racing. So if you have a team, have the conversation and rely on them, use them. That’ll be a massive help for you during your nighttime racing.

Another very important thing is practice how you race. That becomes so important for everyone in your series. Because when you’re practicing, if you happen to let someone by in an area, when it comes to the race they’re going to expect the same thing. So if you did that during the practice and didn’t want them to do it during the race, there’s going to be miscommunication between drivers. During practice session, you may not realize it but you’re always filing information on the cars on track around you. Who’s aggressive, who’s not aggressive, where are you faster, where are they faster and you start to have an expectation when you go to race. So if you’re not practicing like it’s a race, then there’s going to be lots of miscommunications during the race that can lead to a crash. Especially at night, when it’s so difficult to see your surrounding or know where the car behind you is going. So remember, practice how you race.

At Blayze we are big believers in visualization. This becomes very important for nighttime driving. Especially if you’ve already done a few laps or a session you can visual those laps you had on track and you can actually start to hone in on maybe a few areas going back in your mind that you realize, “Maybe I’m not pushing the limits of the car here”. That visualization is an extra tool to focus in on yourself as a driver and asses how you’re doing on track. Which is quite often very difficult to do in the moment. So, take advantage of it. Visualize in between sessions that’s going to be a big help for you leading up to that big race or that next session.

Ultimately the drivers that are going to succeed at night are the ones who have the best feeling of the car and maybe rely slightly less on vision. Now, we want to be very careful how we say this because we are big believers in looking forward and how important where your vision is but there are some drivers that look for a brake marker and then they are going to brake at the brake marker because it’s there. There’s other drivers that are looking to the apex and brake where they feel it’s appropriate. The ones that are braking where they feel it’s appropriate often translate and adapt to nighttime racing better than the others. So if you know you have a nighttime session or a nighttime race on a race weekend try to show up with that mindset and try to work on that even during the day because that’s going to pay off for you at night.