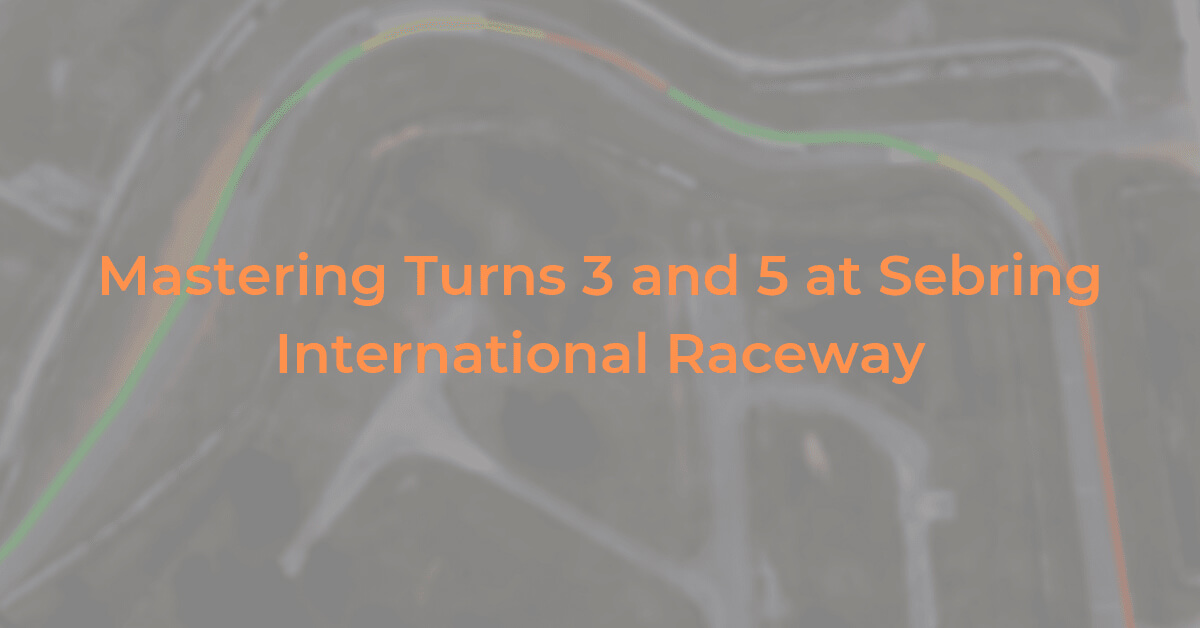 Sebring International Raceway is full of highly technical corners and sections, but arguably no section is more difficult to truly master than turns 3 through 5.   We all know that the most important part of this section is getting a strong exit out of turn 5.  To be able to get a strong exit in turn 5 we need to perfect our driving in turn 3 first.

There are a few errors that we have to work on correcting to help Steven find time and we will list them in order of importance here.

In the photo above we can clearly see the different apex points for each car. On top of that, we can also see a very different angle for each car. The car in front is apexing about 3 car lengths later than Steven.

Getting a good exit is not always about getting to throttle first there are many factors such as minimum corner speed, steering wheel input, and when you get back to full throttle. We have a great article on how delaying initial throttle can actually help you corner exit here.

Steven’s early apex is having a big impact on getting on a good exit out of turn 5 and he is losing time all the way down the straight to turn 7, that is why it is the first thing we want to see him fix.

Here we can clearly see Steven is again apexing too early.  Again we see the difference in car angles between the two cars. The car in front is angled slightly more to the left so again they can start unwinding the steering wheel earlier. Steven from this point on will need to actually add steering wheel input into the car.

He will be running out of track at corner exit because of this early apex, this will make him over slow the corner and will negatively impact how aggressive he can get to throttle at corner exit.

The reason too much steering input does not allow Steven to be aggressive to throttle is because of the famous “string theory” for racecar drivers. Here is a great article going in-depth on this topic.

We want Steven to delay his apex until the very end of the apex curb, which is the perfect marker for almost any car in this corner.

Here we will look closely at the turn in points for turns 3 and 5. Is Steven apexing too early because he is turning in too early?  Let’s take a look!

It is a little hard to tell but in the first image, we can see the car in front just starting their turn in just past where the apex curb starts. We can see a darker rubbered in line to the inside of the car.

In the second image we can where Steven is beginning his turn in point. The spot is nearly identical. Steven is also just as far to the right as the car in front. So, why is Steven apexing too early if he is turning in at the same spot?

Steven’s rate of turn in is too fast. We want to see him slow down his hands during his turn in process. This will slow down the weight transfer, allow him to roll more entry speed and delay his apex spot.

Want to learn more about this technique? We have a great in-depth article specifically in regards to turn in points and the speed of turn ins here.

In the first image, we can see the car in front is turning in just as their entire car gets passed the last cone on the right. It is hard to tell in the second image but Steven only gets about half his car passed the cone before he starts his turn in.

You guessed it, here he is also turning in too quickly, just like in turn 5. So, we need him to delay his turn in point by half a car length and slow down his hands after the turn in so that he can execute on that much later apex.

A more aggressive squeeze of the throttle out of 4 and a bigger or even a full quick lift into turn 4 will have him arriving faster into turn 4, but he will be able to make the corner because the weight will shift back towards the front end helping the car rotate and turn. This will allow him to keep it right at a higher speed and the extra rotation into turn 4 will allow him to be more aggressive to throttle into turn 5. That will give him additional speed at the entry of turn 5.

Here you can see the power of analyzing your video after a session. While we are on track things are happening so fast and we need to be entirely in the moment. This makes it very difficult to analyze why another driver may be faster than us through a section of the track.

Being able to spend time in between sessions in a calm environment analyzing your driving will help give you answers to how to find speed.   Often times drivers will pick up on small things they are doing on the race track that they didn’t even realize they were doing.  Video and data keep us honest and gives us a different perspective!

So, even if you aren’t considering receiving pro coaching from our elite coaches at Blayze where they can watch your video and give you specific coaching just like in the video above, we highly recommend taking the time to put a go-pro or similar video device in the car. Spending just 10 minutes in between sessions to watch your video will make a significant impact in your improvement as a driver!