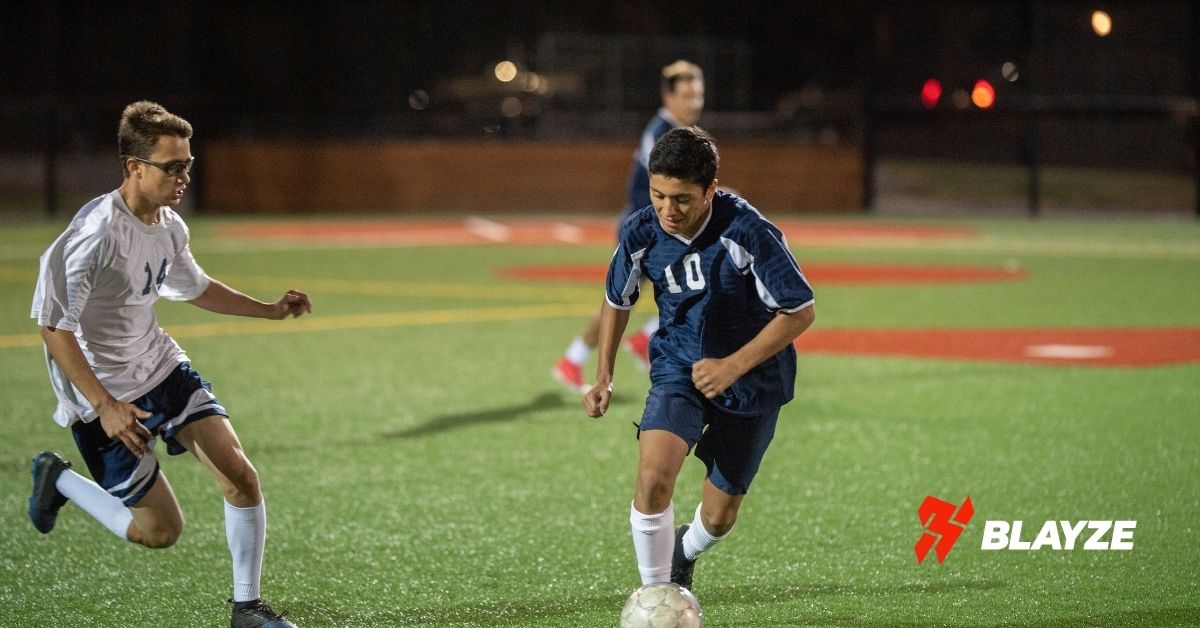 The Modern Game of Soccer

By nature, the outside-backs, full-backs, right- and left-backs, are becoming more offensively minded in the modern game of soccer. As the ball moves forward, up the field, coaches now expect outside-backs to become a kind of a second winger and get into the wide channels to create opportunities to become dangerous. One way to do that effectively is by using overlapping and underlapping runs.

Blayze professional soccer coach Mike Semenza is going to talk to you today about supporting runs. Specifically focusing on overlapping and underlapping runs. There is a big difference between the two and we will dive into it in this session.

Before I start, I want to explain that this is a tactic most commonly used in the modern game by outside-backs or full-backs. This is a way for a full-back to become an attacking player and be dangerous in the attacking third, to ultimately create a goal-scoring opportunity for their team.

Breaking Down the Overlapping and Underlapping Runs

An overlapping run is when a teammate runs around and past the player with the ball. This type of run can pull defenders away from the teammate in possession or it can help create a 2v1 passing opportunity for your teammate with the ball.

With an underlapping run, a player runs inside the ball. As the ball travels, the full-back runs forward inside the pass. The point is to run into space beyond where the ball is, to receive in an advanced position. It also can help to pull defenders away from the teammate on the ball.

I’m going to play the clip and we will break it down in slow motion. We will talk about some details, how you can incorporate this tactic into your game, and go from there.

The example clip is from a France vs. Mexico game held a few years ago. It is a great game, a very offensive-minded game. The overlapping and underlapping run examples all happen within seconds of each other.

The ball starts at midfield. We talked about switching the point of attacking in a previous session and we see this happen when the ball gets switched into a wide channel, a very commonplace for combination plays to be really effective in order to be able to create an opportunity on goal.

Want to know more about Switching the Point of Attack? Click HERE to check our session!

The first element of the play is the recognition of open space. Realizing where on the field is there the least number of players. Before this play develops, we can see a lot of players in the middle of the field. This signals to the attackers that the open space is on the outside of the field in the wide channels.

Any section of the wide channel that is open is a good place to get the ball into because the middle of the field is overcrowded. We need to get the ball out of the tight space to release some of the pressure.

Next, notice the communication on the field. The teammate in the wide channel communicates to the player with the ball with a tactical cue. He raises his hand in the air and calls for the ball, alerting his teammate of the open space and potential for a run. The ball gets switched and the overlapping run begins.

The outside-back sees the open space up the field in the wide channel. He sprints at his own players. This may confuse some people. Why is he sprinting right into his teammate’s path? Watch the clip and see how that run develops. He is going to loop around his teammate with the ball and get into the open space. This is the overlapping run.

The overlapping run is effective because it forces the defenders to make a decision about who to follow. Who’s the most dangerous player right now?

The defenders see the ball played wide. Two defenders immediately get sucked into the ball, locked in on the ball, attempting to win it back. They are pressing hard to win the ball. The third defender does not follow his runner.

Now let us look at the underlapping run unfold. We saw the France teammate run past the third defender. Here is the underlapping run. Instead of looping all the way around toward the sideline, getting around your players, you can run right in front of him. Look at the giant gap the defenders left open.

The underlapping run allows the player on the ball to now make a decision because he has three defenders on him. He splits the gap and plays the underlapping run and now the France player is in the wide channel. He is in a dangerous spot on the field, he has four runners in the box.

Now he can send a cross into a dangerous area of the box. France does not score off this, but this is what unbalances a team. These types of runs are what causes teams to have problems defending a team.

Recapping the Elements of the Overlapping and Underlapping Run

The overlapping and underlapping run is a hugely beneficial tactic for outside-backs as they can become a second winger in the attack. Becoming a player who can be dangerous and whip balls into the box and have combination plays in the wide channels.

This is going to take your game to a different level. Make sure you are doing it at the right times though. If your left-back is high up the field and you are the right-back, if you get caught high up the field too, you will leave your team exposed in the back.

It takes a lot of different elements to create a good overlapping and underlapping run. First, notice the open space on the field. Communicate with your teammates for potential runs. Time the run to get around the teammate to cause the defenders to have to make a real-time decision.